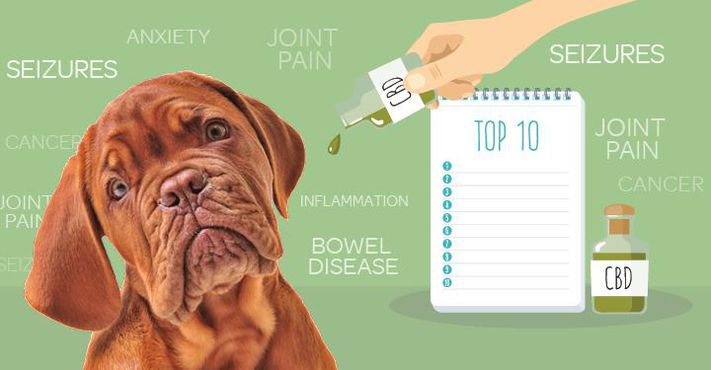 “You try it first, Fido, and let me know what you think.”DOGS NATURALLY MAGAZINE

Ask any new cannabis user how they came to try, then embrace the drug, and their answers may surprise you. More often than I would have ever imagined, pet owners tell me, “I tried it on my dog, first, then began to use it myself.” I don’t know what that says about the owner’s relationship with the dog, but results suggest it’s a reasonable experiment nonetheless.

The justification for dosing pets with measured amounts of medical marijuana is similar to the reasons humans consume the drug. For many, conventional medications either don’t work, are addictive, or have bad side effects. For certain ailments, cannabis products serve as an alternative to conventional medicine delivering many of the same or greater benefits without the side effects.

According to Dogs Naturally, an aging Staffordshire Terrier had a two-and-a-half-inch mammary tumor and metastasis that disappeared three months after treatment with cannabis and didn’t come back. Another dog, a Jack Russell Terrier treated with cannabis for a severe heart murmur and painful arthritis felt comfortable for long walks after a month. That’s how veterinarian Edward Bassingthwaighte discovered cannabis could be a critical part of his holistic veterinary practice. “I simply can’t explain the improved heart murmur,” reported Bassingthwaite. “They normally don’t get better.”

These animals are using cannabis compound cannabidiol (CBD), a powerful compound that’s been shown to help dogs, cats, and other pets deal with a vast variety of ailments. CBD pet oilcan be used to treat seizures, nausea, stress, anxiety, arthritis, back pain, symptoms of cancer, and gastrointestinal issues, among other health conditions in dogs.

The truth about cats and dogs

So, why is this significant? The global market for animal medication is projected to reach $44.4 billion by 2022, driven by increasing investments in animal drug development in response to unmet animal health needs and developments in veterinary diagnostics and services. That’s enough for a whole lot of furry friends.

The global market for animal medication is projected to reach $44.4 billion by 2022 in response in part to unmet animal #health needs #pet https://t.co/NNvYknOyfJpic.twitter.com/VjAHR4VMKO

Inspired conventional medicine manufacturers are well aware of these impressive numbers and are ramping up to take a chunk of the market. Pioneering biopharmaceutical company Immune Therapeutics (OTCQB:IMUN) recognized the massive potential in the growing animal health market and introduced a partnership to tap into it. “Pet owners and animal caregivers are embracing affordable, alternative medications in treating their animals,” CEO Noreen Griffin said in an interview.

After introducing two related patents, Griffin’s company swooped in to pick up part ownership of Cytocom, Inc., earning exclusive United States marketing and distribution rights for products containing Lodonal(TM) and Met-Enkelphline that have shown to treat inflammation, autoimmune disease disorders, and cancer in animals. “If we have medicine available to treat diseases, we have an obligation to provide it, not hold it back from society,” Griffin believes.

Cannabis companies should aggressively follow suit, as experts predict the CBD oil industry will grow to generate more than $2 billion annually at the beginning of the next decade. More than that, this niche market is an area where cannabis can compete at an early enough stage to take on big pharma and sufficiently co-exist.

“The industry has an amazing opportunity in front of it as more and more pet owners realize the effects of CBD on their pets,” Carl Saling, president of hemp-based CBD pet product manufacturer Purity Petibles told me. His company is set to introduce five new pet treat SKUs that are ailment-specific by the end of Q3 2018. “Our mission is to make your pet feel good,” Saling declared.

mCig, Inc. (OTC:MCIG), a distributor of products, and services for the global medical and legal recreational cannabis industry is readying itself for a bold harvest via a joint venture with the FarmOn! Foundation of Empire Farm, NY State in the cultivation of industrial hemp for the production of CBD oil. “We finally decided to jump start our CBD division with an introduction of a new line of hemp products, that will include natural skin cosmetics, full spectrum tinctures, and probiotic pets edibles,” explained Paul Rosenberg, MCIG INC. CEO.

“We first focused on the need, from there arose the opportunity,” explained Irena Raskin, co-founder, CEO, and self-proclaimed “bottle-washer” of My Best Bud in our interview. Her company produces three carefully researched and tested whole-plant, organic, non-GMO, pesticide-free, liquid cannabis products specifically veterinarian-formulated for pets. “The only way to secure our leadership position in the cannabis pet product space is to always rely on the best ingredients, then constantly collect product and testing data to improve everything we develop.

My Best Bud selected for Emmy!
An Emmy is presented for outstanding achievement, and we are honored to be selected for the swag bag of the 70th Annual Emmy Awards due to our highest quality ingredients and strict testing protocols. @TheEmmys pic.twitter.com/byjyRVCMnc

All this is made even more compelling by special FDA accommodations for animal medicine. Should the federal government ever reschedule or entirely deschedule cannabis as an illicit substance devoid of medicinal value, medicine manufacturers of CBD for animals could benefit from existing systems that accelerate a product’s time-to-market.

The Office makes “minor use” exceptions in drug approval for use in major species (horses, cattle, pigs, dogs, cats, chickens, and turkeys). The organization provides waivers from user fees and a faster and less expensive process to obtain legal marketing status for new animal drugs intended for such purposes.

The Office “designates” qualified new animal drugs for specific minor uses or for specific intended uses in minor species (all species that are not major species). The incentives for designated new animal drugs include grants to support MUMS drug approval or conditional approval and seven years of exclusive marketing rights after approval or conditional approval.

“Over and over we’ve seen people who aren’t convinced cannabis will do anything for their pets become advocates of it,” Irena Hauser, co-founder, and CEO of My Best Bud related. In some states, veterinarians can’t formally recommend cannabis as an alternative medicine, so patients are sent to dispensaries for proper counseling. “We would set up My Best Bud tables at dispensaries, speak with people directly about the needs of their pets, and distribute our products. Weeks later those same people would return, well up with tears, and hug us.”

As soon as one-time doubting, denying, or ambivalent pet owners physically get their hands on a cannabis-based medicinal product, a critical transition is made. They’ve just purchased cannabis. Results do what they consistently do. Dogs wag, cats jump, monkeys swing, and attitudes shift.

And now those consumers have an excuse to visit a state-legal cannabis dispensary. “It’s not for me…it’s for my dog.”

When you’re still getting used to the idea of purchasing something at a #cannabisdispensary.

“It’s not for me…it’s for my #dog.” #pet #CBD #medicalmarijuana #hemp #Medicinepic.twitter.com/ik5FwgvBpB

Disclosure: I have no financial interest or positions in the aforementioned companies. This information is for educational purposes and does not constitute financial and/or legal advice.